The relics of the ancient period of Egyptian culture in the museum include some Palaeolithic chisels of the fifth millennium B.C., and also earthenware vessels, flint tools and stone palettes for triturating paint dating back to the fourth millennium B. C.

Belonging to the same period is an interesting group of objects found in 1961 and 1962 by the Nubian archaeological expedition of the Soviet Academy of Sciences at the Khordaud site, one hundred and twenty kilometres south of Aswan (see the vessels, the mortar for pounding grain, palm fruits, the shells of ostrich eggs with geometric patterns, ceramic beads and the ivory bracelet in case 2).

Around 3,200 B.C. a unified, slave-owning state with a Pharaoh at its head took shape in the Nile Valley. During the period of the Old Kingdom (3,000-2,400 B.C.) the basic forms of art came into existance in Egypt. Architecture played the major role among them. At that time colossal edifices were built, such as the tombs of the Pharaohs – the pyramids – and the tombs of the nobility, upon the walls of which reliefs were carved. One such relief, dating back to between 2,500 and 2,400, came from the tomb of the high-ranking dignitary Nimaatra. Arranged in rows, the multifigured composition portrays a great nobleman sitting in front of an altar and making an offering. The figure of Nimaatra, in size much bigger than all the others, is presented in a manner characteristic of Egyptian art – the head and legs in profile, and the schoulders and eyes in full face. The monumental quality, the immobility and the symmetry, typical of the sculpture of the Old Kingdom, are also clearly evident in a sculptural group made of painted limestone portraying the nobleman Wejankhdjes with his wife Inefertef.

Room 82. The Middle Kingdom (2,100-1,788) is represented in the exhibition by a number of excellent relics. Note panicularly the powerfully impressive statue of black granite representing Pharaoh Amonemhat III which dates from the nineteenth century B.C. The standard immobility of the figure is combined with an expressive rendering of the features and the body muscles. The painted wooden statuettes of servants, oarsmen and ploughmen are remarkable for the great variety of the poses (cases 20 and 22); such shabti-tigures were, according to custom, put into the tombs so that even in the life beyond the grave the servants and slaves could carry out the orders of the nobility.

The Egyptians invented a material for writing – papyrus, made from the stems of bullrushes growing in the Nile. Before the appearance of parchment and paper papyrus was used by many peoples, not only in ancient times but also in the early Middle Ages. In the exhibition there is a world-famous example of Egyptian secular literature, a papyrus dating back to the nineteenth century B.C. entitled The Tale of the Shipwrecked Sailor, and also two papyri from the sixteenth century B.C. copied from more ancient manuscripts – The Instructions of the Pharaoh to His Son Merikare and The Prophecy of Neferti. The first of these contains instructions given to the young emperor concerning the way in which he should govern the nation. The second tells of the rebellion started in Egypt by peasants, craftsmen and slaves about four thousand years ago. A valuable written document from the nineteenth century B.C. has been preserved on the lid of a coffin, in which lay the body of an Egyptian girl; upon the lid is one of the most ancient scripts, the seventeenth chapter of the Book of the Dead, a collection of Egyptian funeral texts.

Rooms 83 and 84. The New Empire (1,580-1,050 B.C.). A bronze dagger blade belonging to Pharaoh Thothmes III, part of a cuneiform tablet bearing the text of the peace treaty between the Egyptians and the Hittites and a relief portraying an Asiatic man bringing tribute (room 84), all remind us of the frequent wars due to which the New Empire obtained slaves and valuable booty. Several cases contain articles demonstrating aspects of everyday life among the Egyptian nobility – musical instruments, dice, vessels for w4ne and incense, bronze mirrors, necklaces, bracelets made of faience and glass, metal ornaments inlaid with gold, semi-precious stones and faience, and miniature figures of animals and scarabs carved from stone. An inscription on one of these states that Amonhotep III during ten years’ rule killed one hundred and two lions while hunting. The monumental sculpture of the New Empire is represented by a statue of the lion-headed goddess Sekhmet (1,500-1,400 B.C.) from the temple of the goddess Mut at Thebes, and by a sculptural group from the fourteenth century B.C. depicting the chief scribe – the Theban ruler Amenemheb, his wife and mother (granite).

Room 85. The Last Period (1,050-332 B.C.) in the history of Egypt is marked by the decline of the nation s power. In 525 B.C. the country was conquered by the Persians, and in 332 by Alexander the Great. In the art of the Late Period small bronze sculptures inlaid with gold and silver became very widespread; see, for example, the bronze statuettes of the seventh century B.C. in cases 111 and 118.

Rooms 86 and 87. The burial cult of ancient Egypt is presented in the form of sarcophagi made of granite and of painted wood, mummies, and vessels for preserving the viscera of the deceased, so-called canopic Jars. Room 87 contains a tablet with funeral prayers for the repose of the deceased’s soul, which for a poor man took the place of a sarcophagus. The tablet was attached to the corpse, which was then wrapped in matting and buried in an outlying part of the cemetery. The bodies of Egyptians of high birth were embalmed. For this purpose, as the authors of antiquity tell us, the body, after the brain and internal organs had been removed, was covered with different salts, saturated in balm, wound in a swathing of linen and then laid in the sarcophagus. In the centre of the room is the mummy of the priest Petese (10th century B.C.) and three sarcophagi successively inserted into one another. In them lay the mummy just mentioned. It was opened some years ago, at which time many thin linen bandages in a good state of preservation were removed. Also displayed in room 87 is the swaddled mummy of Babat, the daughter of the priest, and the embalmed mummies of falcons and a cat, regarded as sacred in ancient Egypt. 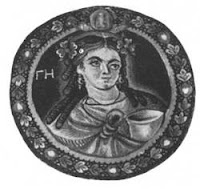 In the last rooms of the exhibition, which are devoted to the culture of so-called Graeco-Roman Egypt and of the Coptic period, fragments of some Fayum portraits of the second century A.D. deserve particular attention. At the end of the last century some half-plundered tombs were accidentally found by Arabs in the Fayum oasis; instead of the masks customary in Egyptian burial rites, upon the mummies lay portraits painted in encaustic on canvas or on wood, remarkable for their unusual expressiveness. The exhibition concludes with the world-famous collection of the fourth to sixth century Coptic fabrics of linen, wool and silk.