Down to the middle of the eighteenth century only timber was used in St. Petersburg for bridges and embankments. In the 1720s, it is true, Peter I did have a masonry embankment-the city’s first-built around a small boat basin in the Summer Gardens, next to the Summer Palace and the Fontanka. 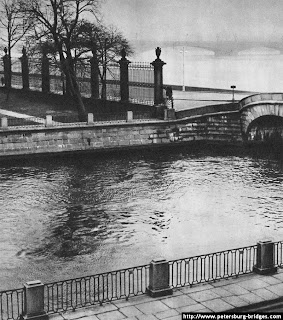 This boat basin, which had been used to shelter the Tsar’s skiffs, was later filled up, but recent archaeological excavations on the site have unearthed the stone walls, complete with the iron rings to which the skiffs used to be tied up. 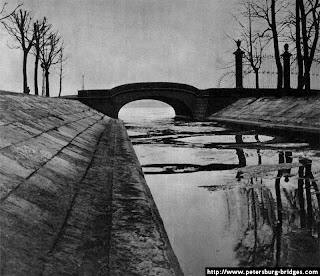 Work on the city’s first capital granite embankment began in the late 1750s in front of the new Winter Palace which was being built to the plans of F. B. Ras-trelli. Later, between the 1760s and 1780s, the entire left bank of the Neva was faced with granite, from the present Liteiny Bridge to the New Admiralty Canal. The stretch in front of the Admiralty, where the shipyard remained until the middle of the nineteenth century, was faced with granite considerably later, in the 1870s. 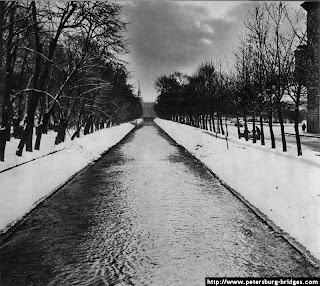 The year 1784 saw the completion of the wrought-iron railing fencing off the Summer Gardens from the Neva quay. Designed by Y. Velten and P. Yego-rov, it has won world-wide fame. In the late 1760s, when the Neva embankments were being faced with granite, two masonry bridges were built near the Summer Gardens. One, called the 9 Laundry (Prachechny) Bridge, was a three-span structure that crossed the Fontanka; the other, having a single span, crossed the Swan Canal dug in the late 1710s, and became known as the Upper Swan Bridge. Both bridges were built by a master stonemason named T. Nasonov, but the identity of their designer is yet to be established. 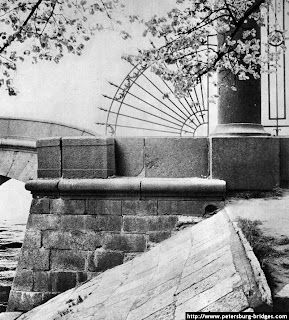 Both the Laundry and Upper Swan Bridges are thus among St. Petersburg’s oldest masonry spans. They were built at a time when the ornate Baroque was yielding ground to the restrained, severe Neoclassicism in Russia. Both reflect this transitional period in the evolution of architecture. 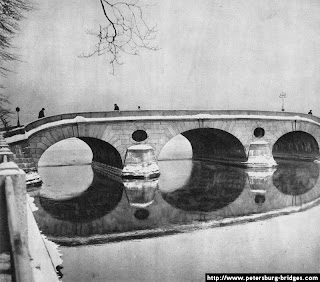 Thus, such elements as smoothly rounded arches, oval lucarnes overlooking the symmetrical projecting ice aprons, and the picturesque sweep of the stone steps are still reminiscent of the Baroque, while the severe and monumental composition combines the grandeur and noble simplicity characteristic of Neoclassicism. 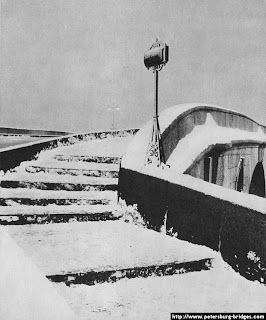 The granite parapet of the embankment; a superbly designed stepped downslope; the graceful arches of the two bridges that break the smooth sweep of the quay; the Summer Gardens’ beautiful railing, with the fine rhythm of its granite pillars and the rare elegance of its design and proportions, and the noble forms of the ancient trees, all combine to create a striking architectural ensemble.